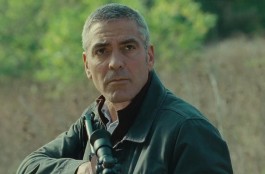 So I finally saw the new movie with George Clooney called the American and was pleasantly surprised by the movie. But the reason for this article is because George Clooney worked out like a madman for the movie to portray a lone wolf type of assassin in battle ready shape.

The movie turned out really, really good. Both Clooney and the lead actress, Violante Placido, daughter of legendary Italian actor Michele Placido gave a great performance. In fact, the movie somewhat reminded me to one of my favorite flicks as a teenager – True Romance with young Christian Slater and Patricia Arquette (penned by Quentin Tarantino). So anyway back to fitness.

So the whole workout shown in the film revolves around George Clooney doing pushups and pull-ups in his bedroom as well as sit-ups and stretches. This all is done in order to preserve his muscle mass and upper body strength.

What is missing however is the fact that George Clooney got pretty freaking leaning for the movie – taking into consideration his almost 50 and he’s natural slim and fit, but definitely not a ripped guy. So it wasn’t so much that he got very muscular, but that he got lean.

If you are already lean, you can focus on building muscle that looks good (on screen and in real life) by doing a workout such as Visual Impact. This workout is designed to give you hard, dense and shapely muscles. A cool trick revealed in the workout is to wrap your skin around the muscles and make them pop by strategically alternating between size and density training.

You Can Tell by His Face He’s Gotten Very Lean

When your face is tighter and slimmer, you look younger. In fact in my early 20s I wondered what made the older guys at the gym look “older.” It was the fact that in their attempt to get huge, they ate their way up. So they got bigger and fatter – including having a fat face. 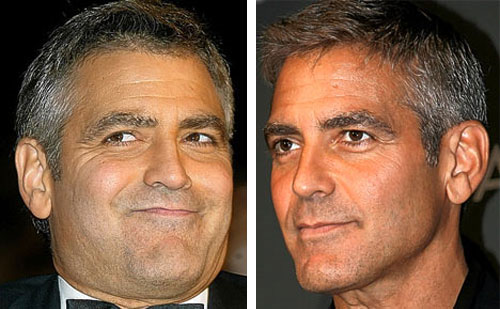 So when you take a look at his jaw line, you can be sure he is pretty lean – 10-12 percent body fat at the most, but probably way less than that. Actors and other people whose success depends on how they look know that being lean is the number one thing to do to look good on film.

So the cool thing is that the movie shows a pretty decent way to get in shape by getting strong at pushups and pullups. Even folks that don’t have a clue about fitness will get at least decent results by focusing on these two exercises.

In the movie George Clooney does pushups with pretty decent form. Not surprisingly, he’s pushing muscles are well developed. He’s got great arms and shoulders and ok chest development. Of course, his character is an assassin, not a bodybuilder. So his look works for the part.

By the way – another assassin character, the role played by Robert De Niro in the fantastic movie Taxi Driver, shows him getting in shape doing these two exercises – pushups and pullups. However De Niro does clapping pushups, an explosive variation of the move, in that film.

So although Clooney does the pushups with great form, his range of motion on both pushups and pullups plain sucks. With pushups you can get away with lowering until your upper arms get parallel to the ground and still get great results. This is not the case with pullups. 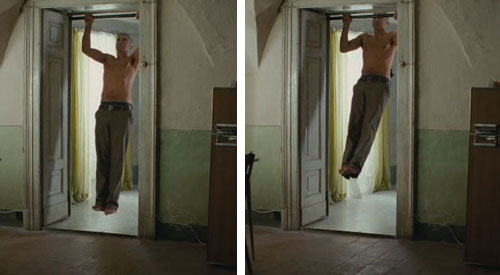 As you can see – he’s going just halfway down. I don’t know if that’s how he trained all the time, but this is not the way to go if you want pullups to be effective. When you watch the movie you will see that George’s back development sucks. If he had trained with full range of motion pullups and gotten to 15-20 reps, he’d have a great v-shape body.

How to Fit Exercise in Your Busy Day

What I like about the movie however is that it shows his character fitting exercise in his day. Taking a clue from Clooney, you could maintain a decent body by doing pushups and pull-ups in the morning or evening.

Push/pull super sets work great. You do a set of pushups, then rest and then go to pull-ups, rest some more and begin with pushups. The reason this works is because while the pushing muscles work, their antagonists, the pulling muscles, must relax in order to allow the pushing movement and vice versa. 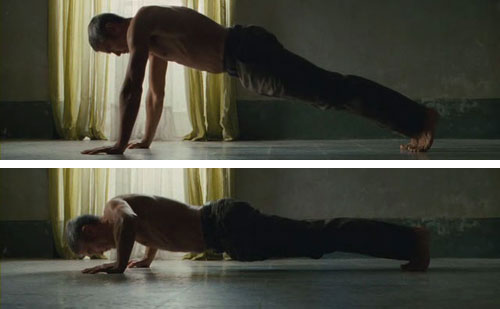 Here’s George Clooney showing good pushup form. While he’s doing pushups, his pulling muscles – the back abd biceps, relax. So this forced relaxation helps you recover faster. Another tip I got for you is to do house chores in between sets. Clean the room or brush your teeth before bed, etc.

3 thoughts on “George Clooney Workout for the American: An Analysis”