I first heard of the usefulness of sternum pull-ups towards improving muscle-up performance from my colleague Milko Georgiev, Bulgaria’s top conditioning coach. Here is a video I shot a few years back of him doing 9 muscle-ups with great form.

Prior to that, I had read an article by Charles Poliquin mentioning this exercise. Poliquin himself was inspired by the great Vince Gironda if I recall correctly. However I never found a comprehensive guide on doing the sternum pull-up, much less on using it to work towards muscle-ups. So this article is a first in a series that will help you do your first muscle-up.

Above you can watch a video I shot demonstrating the basic sternum pull-up. Again, the three keys to the move are using your back, exploding and pulling the elbows back once the upper arms reach parallel.

What is the Sternum Pull-up

The sternum pull-up is simply a pull-up variation in which you need to touch the bar to your chest. The cool thing about this kind of pull-up is that it will teach and strengthen the groove that will eventually lead to muscle-up mastery.

Here is a simple progression towards getting good with the sternum pull-ups. Remember to watch your form. With the gymnastic type of movements it is quality that counts more than quantity.

How to do Sternum Pull-ups 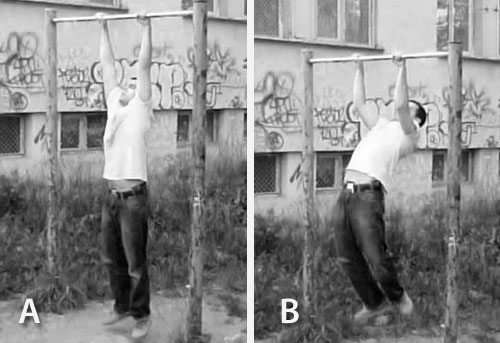 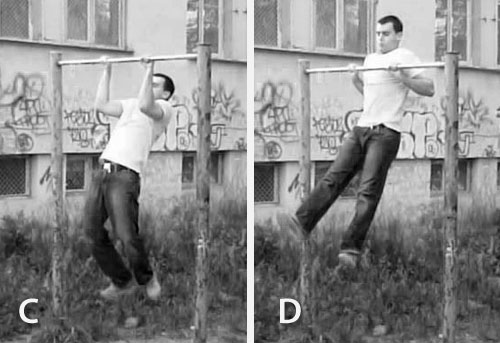 I am shooting these pics and videos in the backyard of a high school near the gym. I go there after I get off work and surprisingly the kids from the neighborhood have no interest whatsoever of using the free pull-up bar. A pity.

By the way – although the photos look sort of ‘ghetto,’ this neighborhood is considered a very nice one. In fact there are ‘commercial’ sponsored graffiti on the facade of the school.

Although these moves are similar there are two major differences between these exercises. Both of these share a similar groove. The muscle up however is finished with a lean forward and a rotation of the arms around the bar so that you end up in the lower portion of a dip position on top of the bar.

The other difference is that while the sternum pull-up can be done with relatively no momentum, few people posses the strength to do muscle-ups with no horizontal momentum. What this means is that the bottom of the movement there is a forward swing of the body. 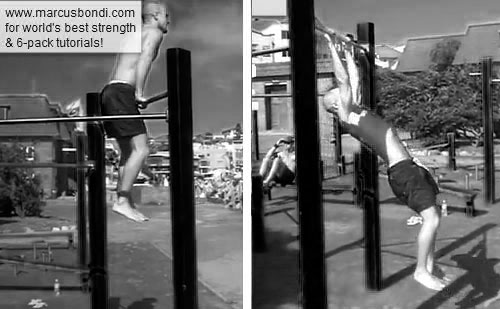 This creates a swing backwards that, when coupled with a vigorous pull, will allow you to pull-up behind the bar as opposed to below it. Above is a photo of Marcus (link to the video) from Bondi beach, Australia setting a record in muscle-ups and showing the forward swing of the body. If you simply pull up from a dead hang, you will only hit the your chest and won’t be able to transition on top of the bar.

Here you can see Mohamed Makkawy performing an advanced version of the sternum pull-up, where he is leaning way back so the move becomes a sort of a row at the end. The photo is from Vince Gironda’s book Unleashing the Wild Physique, a treasure chest of advanced training principles. 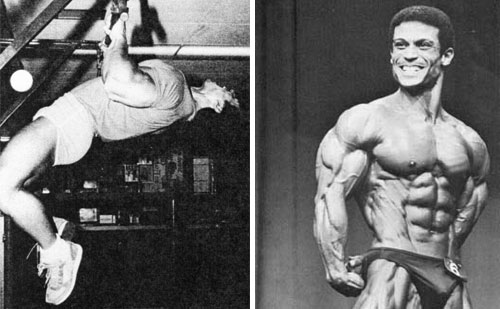 Makkawy is gifted with a naturally v-shaped body. Notice the athletic physique, a thing that is missing from the current sport of bodybuilding. Here is an example (video) of a current up and coming bodybuilding super champ. Notice the huge stomach (caused by excessive growth hormone usage resulting in enlargement of the internal organs). No comment.

Note: the next article will teach you a special exercise that will bring strength and train the rotational part of the muscle up.