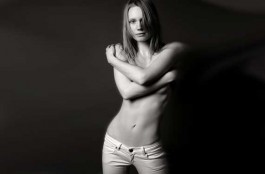 Can’t go wrong with a picture of a girl with a sexy body. Anybody disagree? Didn’t think so lol.

In Part 1 of the Core Training Series I discussed the Arch Position – a way to get a strong and healthy lower back. Today it’s six pack time. But I’m getting ahead of myself. Let me tell you what happened today.

Met up with a buddy of mine for a quick talk at a bar. He happened to be friends with the bartender there. We started talking and I found out the bartender was also a model.

He said he was training his abs thoroughly with various exercises and was quite content with their development. He also mentioned however that he was complaining of lower back pain. Said his lower back muscles were failing him.

He didn’t understand the major function of the abs – core stabilization. The range of motion of the biggest abdominal muscle is very limited – its function is to shorten the distance between the chest bone and the hips.

This only works when doing crunches. Sit ups on the other hand are done in the most part with the muscles of the front of the upper thigh.

So what this dude didn’t realize was that in order for him to avoid his lower back “failing” him, he had to have strength and control over his abs. Not just muscle.

Because he was a model, he was training his body primarily with bodybuilding exercises. Nothing wrong with that if you also train for strength and have control over your body. He clearly lacked that.

His blank stare just confirmed it when I tried to explain to him that stabilization of the trunk – and not body shots  – is the primary function of the six pack abs.

The hollow position – this is a gymnastics term and somewhat of a misnomer. You see, you don’t actually suck your gut in. No way is this stable. In the hollow position you actually want to brace your abs as if someone is gonna punch you.

To experience this whole body position, do the following. First lay down on the floor face up. Tuck your pelvis forward. At the same time the small of your back should remain on the floor.

Now – don’t sit up – but just try to shorten the distance between your pelvis and your sternum – the chest bone. Lift your straight legs a bit off the ground.

Next have your arms extended beside your ears and raise your head and shoulders a tad above the floor.

Did you know that the hollow position is probably one of the biggest secrets of the gymnasts? It allows them to concentrate together the strength of all of the muscles of the front of the body. The Arch Position does the same for power lifters by giving them control over the muscles of the back of the body. Another secret – most guys that pose for ab shots do the hollow position to show of their abs.

I was looking for a way to show the hollow position on video and then I remembered watching this DVD series called Hip Hop Abs. Its cheesy as hell, but that trainer guy sure knows how to control his abs and explains the movement nicely.

Ignore the whole cheesiness, because this dude shows an excellent way to feel the hollow position. He calls it tilt, tuck and tighten.

Babe by Vincent Boxer by Anthony