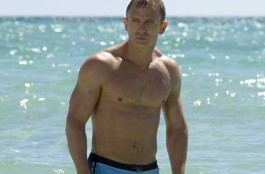 Daniel Craig’s Body Transformation in Casino Royale and Quantum of Solace as James Bond has been quite an inspiration for many guys looking to get fitter. Not to mention that his scene emerging from the water in his first Bond movie resulted in more than a few gasps from the female audience.

Daniel Craig bulked up significantly for his first role. For the second movie, he was a bit leaner, a bit less no-neck. The reason for this was that his Bond was now portraying a more refined version of the agent.

When Daniel Craig was told he was going to be Bond, he gave up smoking except for the odd cigar. He also got in touch with Simon Waterson, ex-marine and trainer to the stars, who had also worked with Hale Berry, Chris Evans, and Pierce Brosnan to name a few.

Daniel Craig had trained before (check him out for example in the Tomb Raider movie with Angelina Jolie as well as in the excellent Layer Cake), but never to this level. His diet regimen was based on avoiding certain foods after a certain time.

Simon Waterson and Craig exercised five times a week, with the weekends off. This included the freedom to drink alcohol, which was prohibited during the week.

Simon Waterson’s philosophy is to put his celebrity clients through lots of circuit training to keep their heart rate elevated and thus stimulating muscle growth and burning fat at the same time. The workout included circuits, pullups, push ups – nothing really new. Simple but definitely not easy.For fatloss Craig would hop on the bike after the weights.

Here’s a circuit training workout created by Daniel’s trainer. A circuit raining workout simply means going from one exercise to another while trying to minimize the rest. So you build muscle and burn fat simultaneously. 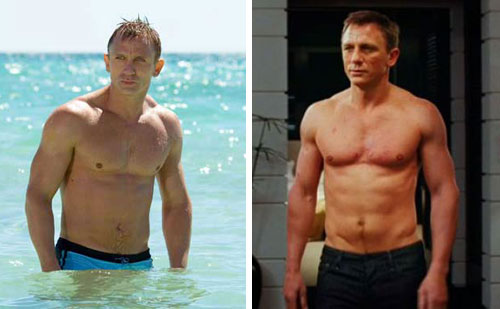 Pictured above – Daniel Craig in Casino Royale (left) and Quantum of Solace (right). As you can see, he was much bigger in the first Bond. His shoulders and traps were huge.

VIDEO: Can Working out Actually Make You Look WORSE?

Here are the exercises for Daniel Craig’s body transformation routine:

Do 4 “giant sets” this means going from the first to the last exercise 4 times. Perform 15 reps on each exercise with as little rest as possible when moving to the next. Rest a minute after each circuit. Perform this routine for 6 weeks 3-4 times per week.

Here are a few comments and observations from Danial Craig’s trainer regerading his work ethics and attitude. I believe these are the real secrets behind the guys with great physiques.

In fact, here’s an article that explains how effort is the most important thing when it comes to muscle growth ==> Does Rep Count Even Matter? Controversial Findings of a Recent Study!.

Here’s a photo from the latest Bond movie, Skyfall, coming this Fall. As you can see, Daniel Craig has a solid development of his back musculature. This is one of the core philosophies of his trainer – to prioritize the posterior chain muscles for better posture and muscular balance. 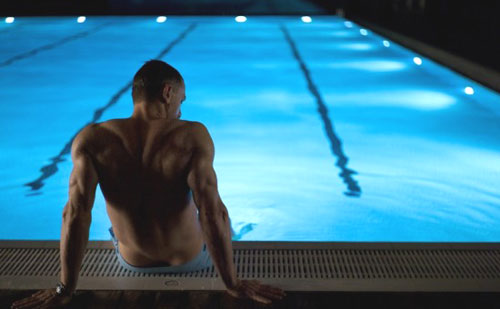 This is something you won’t see on many of the guys in the gyms who only train the front of the body (pecs and biceps). Huge mistake.

Simon Waterson reports that after a few months of training for his role, Daniel Craig was performing with a body of an athlete. He had 100% focus on what he wanted to achieve.

To spice things up, Simon decided to compete against Craig in the workouts. So instead of simply coaching him, they trained together and pushed each other. I can attest to the effectiveness of working out with a fit and even stronger partner. It will result in the best gains of your life.

Here are is my favorite workout for a visually striking body like Daniel Craig.

If you don’t have experience in the gym, choose Visual Impact instead. The Hollywood Physique is for people who have already gained some muscle mass, but are not quite satisfied with their body and want the physiques of guys like Daniel Craig, Ryan Reynolds, Brad Pitt, etc.

Hope you enjoyed this article on Daniel Craig’s Body Transformation. I personally immensely enjoyed Casiono Royale and am looking forward to the 3rd Daniel Craig Bond movie this fall. Hope it’s not another Quantum of Solace…