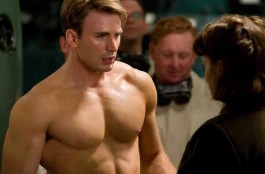 The Captain America workout. Chris Evans gained about between 20 lbs of muscle for his role in the movie while at the same time dropping his body fat percentage from 12.5 to 8 percent. Even though the actual physical training is by far the most important thing when it comes to getting more muscle, you really have to eat more in order to weigh more on the scale.

Chris did it by eating skinless chicken, turkey and fish in huge quantities and lots and lots of salad and all sorts of green vegetables.

Chris’s trainer for Captain America, Simon Waterson, has become Hollywood’s go-to guy when it comes to getting actors in super hero shape. Previously he helped Daniel Craig get buff like a bull for his roles in Casino Royale, The Invasion, The Golden Compass, Defiance and Quantum of Solace and Jake Gyllenhaal for his role in Prince of Persia. Currently he is busy getting Sam Worthington in Spartan shape for Clash of the Titans 2.

In addition to that, he also trained Halle Berry for her James Bond movie role, Gerri Halliwell for her music video It’s raining men and Pierce Brosnan for The World is Not Enough and Die Another Day. 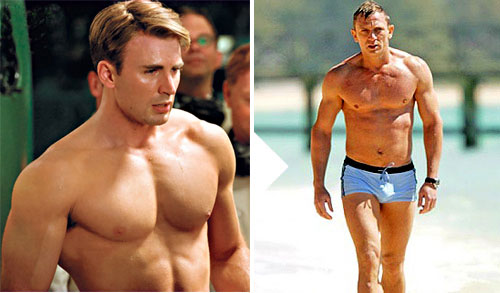 Simon’s basic philosophy is to combine weight training and cardio into one workout using circuit training around 10 basic multi joint exercises done for 10-15 reps with as little rest as possible.

Chris and Simon would train six days per week with an optional workout on Sunday to hit muscles that are not trained enough or lagging. They would do 3 weight training sessions and two cardio and core sessions.

Each weight training session would begin with a plyometric bodyweight circuit to improve overall functional fitness. Then, they would focus on 2 muscle groups per day. This kind of combined training builds a very balanced physique with a combination of myofibrilar (the muscle fibers) and sarcoplasmic (the fluid in the muscles) hypertrophy.

Before getting in Nazi-butt-kicking shape as Captain America, Chris Evans was still in pretty great shape, as far as looks go. For his roles in Not Another Teen Movie and Fantastic Four, Chris worked with Hollywood trainer Steve Zim. His methods show quick results by only focusing on the visible muscles and using targeted movements with custom range of motion to target only these muscles. 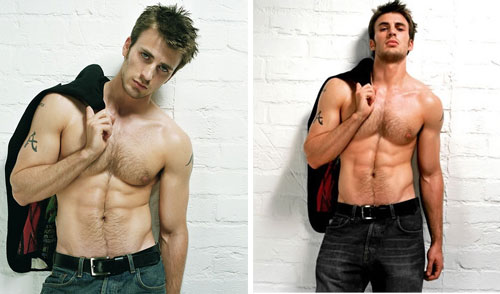 Steve Zim has developed a method of specifically targeting only the intended muscles with his own custom devised exercises. With his method it is possible to have a noticeable difference in your muscular development in a matter of weeks. Here are 3 tips from Steve Zim, Chris Evans’s personal trainer on Fantastic 4 and Not Another Teen Movie: 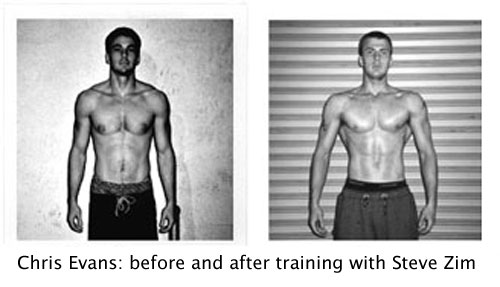 Movies and the Hollywood Body

Getting a Chris Evans Body

For that kind of physique, characteristic of so many of the A-list celebrities, it is crucial to get lean with a low body fat percentage and also develop the arms, chest, shoulders and abs. For this kind of body I strongly recommend you get a workout partner or trainer who is already in fantastic shape (so he can show you what to do and more importantly PUSH you to train hard.

Another option is getting the Visual Impact Muscle Building workout for anybody looking to build a stunning muscular body. This workout plan will show you what you need to do in the gym. However, you still need to train hard!