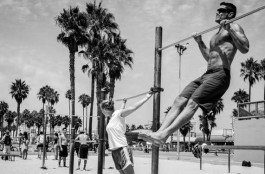 I first discovered the l-pull up while working out in my neighborhood in my teens. The father of one of my buddies was cranking out 15-20 reps of this pullup variation where he was sticking his legs in front of him instead of letting them hang loosely.

And let me tell you, the guy was built! He told us stories of doing handstand walks around the block when he was our age. Even now, some 10-15 years later, the guy is still in kick ass shape.

It took me a while to get a hang of these but it was worth it. Various L-position holds, like the ones described in the new Convict Conditioning 2 give your abs a run for their money. In, fact, I think the l-pull up covers probably half of your body’s muscles. Talk about being efficient. Another reason I like these pullups is that you can’t cheat or kip with them. It’s a move that demands total control of your body.

What’s the L-Pull up

The l-pullup,a variation where you stick out your legs in front of you so that your body forms an L, is so efficient because there is constant tension on the abs. Because the primary function of the core and abdominal muscles is stabilization – i.e. prevention of movement, the best way to train them is with various holds.

The trick is to try to control the swinging of your body which is caused by the displaced center of gravity. The l-pull up taxes both the top and the bottom of your abdominal muscles. So both the six pack (rectus abdominis) and the internal and external obliques (v-cut or lower abs) get trained.

The reason for this is that your torso pulls down on the sternum (this works the sixpack – rectus abdominis) while the legs pull down on the external obliques and hip flexors (so you get a lower ab workout too.

How to Master the L-Pull-up

The basic technique is simple. You hang from a pullup bar, raise your legs to 90 degrees and then pull up with your lats. 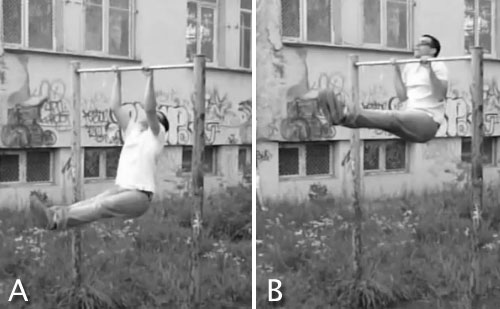 I suggest not going all the way down initially until you build strength and learn to keep your balance because relaxing the shoulders will make the move infinitely harder. Here are a few increasingly harder l-pull-up variations

Here’s a video of the L-pull up we shot in 2010. These bad boys are still tough for me. As with all bodyweight exercise, the fastest and easiest way to get better at them is to… lose weight!

Here are a few ideas for your l-pull up workout. At this point in my training I think it’s a good idea to switch pull up variations once every 3 to 6 weeks. So for example you can work up to 20 pullups in one variation and then switch to another, very dissimilar one. Say wide grip pullups then close grip chin ups. Same for l-pull-ups. Focus on them for a while and then drop them for something else.

I wanted to end the article with a pic of Bruce Lee (above), descending in a l-pull up position down a rope in the outstanding 1973 movie Enter the Dragon.

16 thoughts on “Is the L-Pull-up the Most Bang for Your Buck Chin-up Variation?”