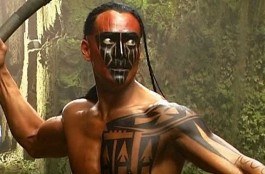 Just got back from a nice walk in the snow with my lab Lucky. It was so refreshing in the park – the cold air cleared my head up.

So anyway, a few days ago I recommended a movie with Mark Dacascos – Instinct to Kill. It is a a straight up cheesy B-Movie guy’s flick.

Mark Dacascos in The Brotherhood of the Wolf

Well, yesterday I watched another Mark Dacascos movie – The Brotherhood of the Wolf. This one was NOT cheesy. It has awesome fight sequences but it also is a fully enjoyable adventure movie.

If I had to describe it, it would a sort of mix between Pirates of the Caribbean, The Hound of Bascerville (haven’t seen a movie adaptation of it but I guess one must exist), the French comic book Rahan and Tony Jaa’s Ong Bak (Which has sick fighting sequences.

Actually pretty much the whole movie is a fight sequence. I’m not complaining though lol.). Probably its only drawback is that it’s kind of longish.

Here is a video that shows some of the training Mark did for another movie, Only the Strong, which I’m going to write about soon too. Notice how he executes the movements with perfect form – he was trained by an accomplished bodybuilder.

So What’s My Point Exactly

I wanted to briefly mention two things. The first one is the us vs. them mentality that marketers use. Many fitness products and doctrines also use this in order to engage us.

In reality successful people do not divide themselves in bodybuilders vs. athletes, heavy lifters vs. pumpers, etc. This is just a gimmick made up by clever salesmen.

The other thing I wanted to mention stems from the first. Because of the successful marketing brainwash, many people are stuck in their old ways and fail to progress. Most people want to look like celebs, actors from movies, athletes, etc. But they either train only for strength or only for muscle mass.

After a certain point on, you cannot gain more strength without getting bigger. You can’t flex bone. The same goes with mass. You need to train for strength at least some of the time so that your working weight, with which you make your muscles grow, is bigger.

The truth is, the body is like a vessel. You can fill that vessel up with strength but it can hold only so much. To progress even more, build yourself a bigger vessel by gaining muscle mass.