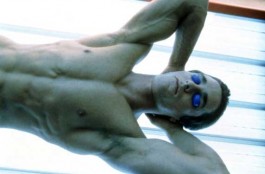 I find myself getting really pumped up when I watch a good movie. For one thing, I enjoy a good movie. Plus, it never hurts to see one in which the actor or actress is in top shape. Well, Caleb Lee happened to tag me to share 25 random things about me. So here goes – my top 25 movies that motivate me to train hard, kick ass and take names.

American Psycho
The self-obsessed and narcissistic psychopath played by Christian Bale takes great pride in every detail of his life. He is constantly on a diet and exercises religiously. The ironic thing is that although Christian Bale got into fantastic shape for the movie, the message of the film is that this level of body consciousness shows an unhealthy mind, obsessed with vanity. He is still a great physique role model though LOL.

I Am Legend
What better way to portray the solitude of the man dedicated to his training than to feature it against the backdrop of an empty city. Will Smith purposefully leaned down quite a bit in order to be convincing as a man fighting for his survival. Plus a real fun movie, folks. 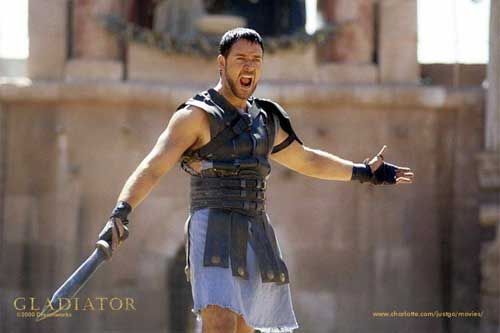 I, Robot
Every movie with Will Smith is worth watching so that you can nourish on some of his contagious energy. He always gives it all. Because of the physicality of the movie Will Smith opted to present a powerful looking physique. So he made the list.

G.I. Jane
At age 35 Demi Moore really started showing she was taking great care of her body. Ridley Scott cast her in the role of a woman training to be a navy seal. What follows are some of the best training sequences captured on film, including Demi doing one arm pushups. Note – Demi also shows off a fantastic physique in 2 other corny but fun movies – Charlie’s Angels 2 and Striptease. 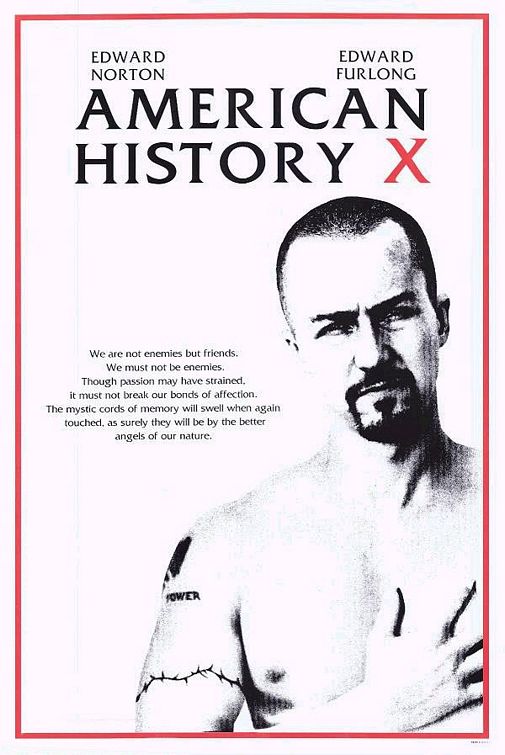 We got Edward Norton. Personal trainer Anthony Cortés got him so buff and the change was so dramatic, that Arnold Schwarzenegger himself supposedly thought Edward was on steroids. Norton’s comment – he says he just are like hell and trained like it was going out of style.

We’ve got not one, but two actors in fantastic shape in this movie. Arnold Schwarzenegger is in his usual muscular top shape but the real surprise is Linda Hamilton. Having undergone a strict workout and diet regimen, she displays her rock hard body fighting the evil T-1000 and doing chinups in her room in a mental asylum. 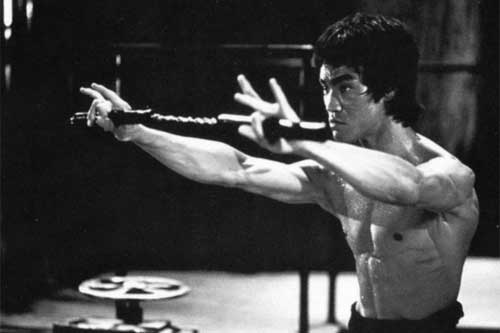 Bruce Lee’s last movie was also his most polished one. He trained vigorously so that his on screen appearance would be visually as impactful, as much the speed and accuracy of his punches and kicks were technically impressive. He looks like someone carved him out of a marble block. Plus, his on screen persona exudes raw and powerful charisma. Highly recommended.

Such a list can’t go without mentioning this one, right? Both Ed Norton and Brad Pitt are very lean in the movie. To match their characters, they have trained to enhance their movie persona. Edward Norton’s guy looks more like a weakling though – lean but not muscular, while Brad’s Tyler Durden is a Bruce Lee-like ripped bad ass. A note here – if you want to look muscular, get some muscle mass and then strip as much fat as possible. This is the secret to looking so muscular.

A brilliant portrayal of honor and manhood. Russel Crowe’s character is powerful and stoic, exuding calmness and rage, resolution and obstinacy.

The 36th Chamber of Shaolin

I have featured numerous Kung Fu movies in the list. They represent the pinnacle of what the human body is capable in terms of movement and they showcase martial artists who sport top level physiques. This movie in particular is worth watching for the now classic scenario where a hero has to go through a series of training obstacles to achieve mastery. Boot camp Shaolin style – bring it on! 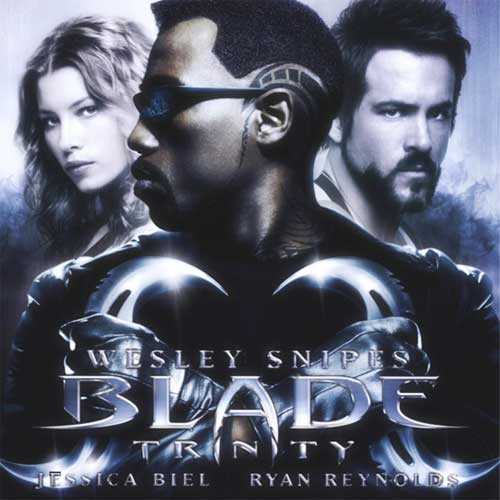 First things first – this is the third installment of the series and as such is the worst one of the three Blade movies. In all three of them Wesley Snipes is in fantastic shape. The first movies is a good one overall, while the second one benefits from the gloomy imagery that only comes with a Guillermo del Toro flick. I chose the third movie because in addition to the bad ass Blade it has a (almost) no more wimpy looking Ryan Reynolds and a buff and sexy Jessica Biel. So there – style over substance lol.

Brotherhood of the Wolf

I can’t recommend this movie enough. First, Mark Dacascos gets to show off his fantastic fighting skills and top physique. Second, the movie is the perfect adventure story, if you happen to like these kinds of stories like I do. Third, but definitely not last, there are two VERY cute ladies right there – Émilie Dequenne and Monica Bellucci. Can’t lose with this flick.

Even if you are not into martial arts movies, you’ve got to give it up to Jackie Chan. In his movies he demonstrates two things. The first one is how much abuse the human body can take. He does pretty much all of his stunts. The other thing is what fantastic feats and acrobatic a trained martial artist of this caliber is capable of. 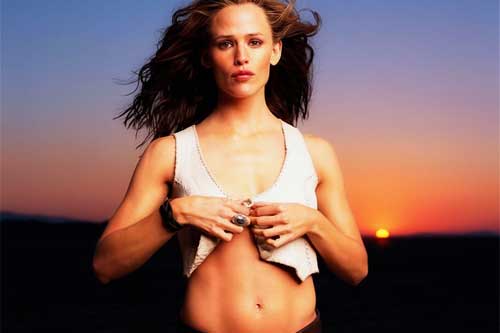 Most comic book movies turn out lame or corny, but I keep on watching them any way lol. This one is no exception (as in it is quite lame unfortunately). It made the list however, because it has a uber athletic looking Jennifer Gardner.

Jet Li, a martial artist, is surprisingly also a solid all around actor. He never got a big break in an English speaking movie. Unleashed (also known as Danny the Dog) is one of his best. Fist of Legend however is worth just for the martial arts – no acting accolades here. The action sequences, choreographed by Yuen Woo Ping, are so spectacular that they inspired the Wachowski brothers, to hire Yuen so he can bring this level of movie awesomeness to the Matrix series. Of course, Jet Li does it better than the white boys. Note that Fist of Legend is a remake of Bruce Lee’s hard hitting classic Chinese Connection. 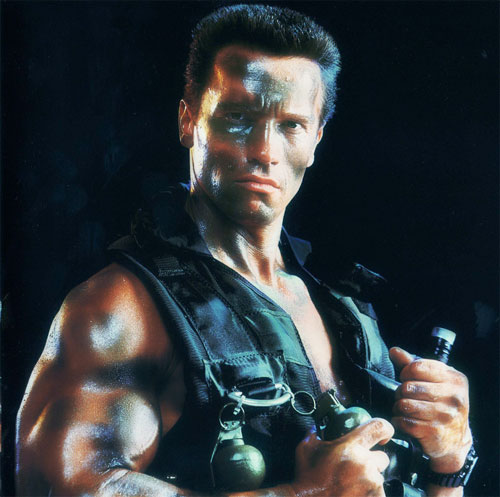 A typical high-body count 80’s action extravaganza. Plus, can’t deny the fact Arnold’s arms look damn good while he harvests through wave after wave of baddies as if he was playing a video game. Gotta love the 80’s lol.

Christian bale is in quite a muscular state in this one. Well, when you play a super hero, I guess it’s a must to look the part. The remarkable thing is that prior to filming this movie, Christian Bale worked on another movie – The Machinist. For that one he purposefully lost a whopping 63 lbs by starving himself on a diet of a can of tuna and an apple a day. After the movie, he hired a UK celebrity trainer and quickly regained the lost muscle. Note that we are talking about muscle memory here. This means regaining your muscle mass as opposed to building size from scratch. 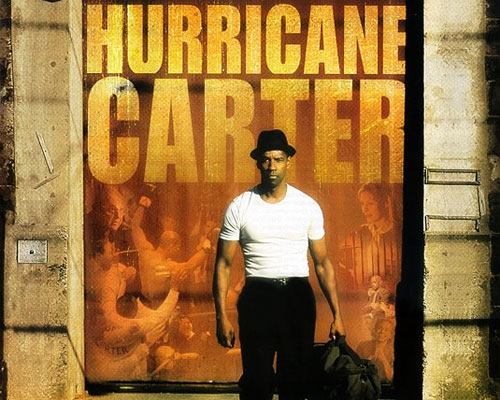 This is the captivating story of the wrongfully accused boxer Rubin ‘Hurricane’ Carter. I feature it here for two reasons. First, this movie is the perfect example of the get in shape behind bars movie. Denzel is ripped. Second, this movie talks about one of my favorite concepts – inner strength. The Hurricane turns into a warrior/scholar in prison. He studies law books and trains like a madman for his fight outside.

I’ve got another boxing heavy weight of a movie right here. Prepping for the role, Will Smith decided not to try to look like a boxer, but to become a boxer. He ran the distances that Ali ran and sparred with hard hitting real boxers to bring believability to director Michael Mann’s movie. Incidentally, Robert De Niro also underwent real life boxing training for his award winning performance in raging bull some 20 years earlier. 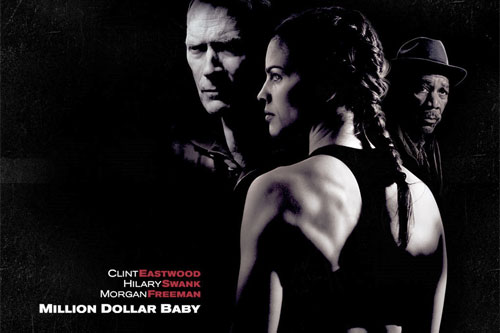 These boxing movies just keep on coming. A fine, fine flick from another one of my favorite directors – Clint Eastwood. As an actor, he has a powerful and charismatic don’t-mess-with-me-punk presence. As a director he shines even more. In this movie Hilary Swank not only learned to move and box like a real fighter, but also dramatically altered her physique by adding significant muscle bulk via weight training and a protein rich diet. And, she got her Oscar.

I love martial arts movies and I couldn’t miss out on the chance to sneak in another one of those here. The spectacular thing about this movie is how the fighters flawlessly and fluidly execute the choreographed primate acrobatics. No substance here folks. Just a visual fest of the boundless potential of the human body. 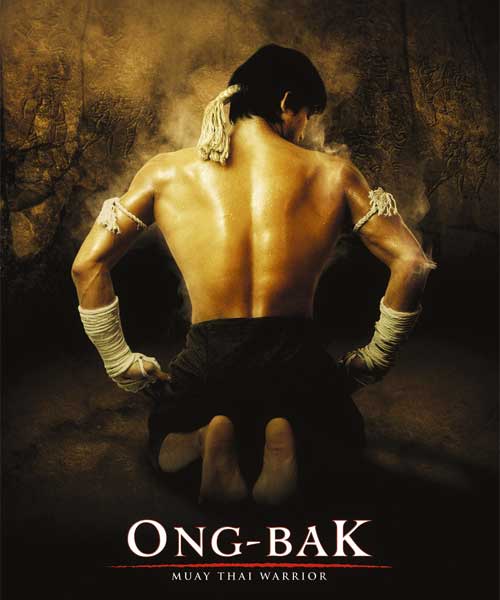 Tony Jaa, a stuntman, martial arts, actor and fight scene choreographer. This is his first big movie and he shines in it. Fantastic acrobatic skills, break dancing movies used to hurt the bad guys, bone cracking Muay Thai elbow and knee strikes. The movie has it all. This guy seems to take the best action parts from Bruce Lee and Jackie Chan. He still lacks Lee’s charisma but the future is ahead of him.

The ultimate story of loss and redemption. It’s us against the world, ain’t that right Rock? The movie is choc full of so many memorable moments. If you can’t be motivated by a rocky movie, better check that pulse of yours lol. 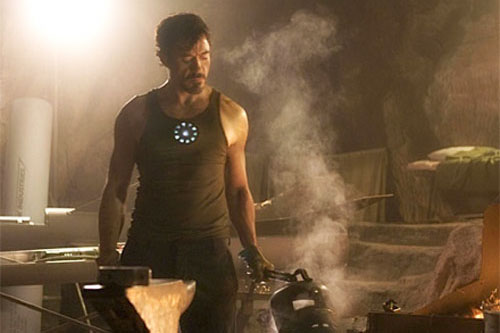 Trainer Brad Bose got recovered addict Robert Downey Jr.’s less than trained body to an Iron Man – worthy level. Apart from this, the movie is one of the best super hero movies of all time. Just watch it for enjoyment’s sake if you haven’t done so.

Kung Fu Hustle
I have made sure that the bulk of the movies I recommend in this list are not only highly motivational, but also of high quality and plain old fun. King Fu Hustle is no exception. Stephen Chow, aged 42 in this movie, puts most 20 something’s to shame when it comes to being in shape. Add to this the fact that his comedy style will make you piss your pants. Now top that off with the fact that he is a real-life martial artist (like Wesley Snipes) so his moves are authentic. And, his Bruce Lee impersonation is impeccable. You just gotta see this one folks – a killer flick.

47 thoughts on “25 Movies That Motivate Me To Train Hard”